A $600M project on the shore of the East River, spearheaded by Robert De Niro.

myComply has been chosen as the desired solution for workforce safety qualification, daily reporting, and controlled jobsite access on Robert De Niro’s Wildflower Studios project in New York City. Read on to find out more.

Los Angeles has long been lauded as the hub of the global film and entertainment industry. However, De Niro’s state-of-the-art build may challenge that notability by bringing more large-scale production to the Big Apple. The promise of a Hollywood-caliber studio in a (first-ever) multi-level format, led by one of the most prolific actors of our era will be sure to attract some of the world’s top talent.

“While New York City is no stranger to being the star of many visual stories — the city effectively a character in itself — this … complex marks a new chapter in the city’s ability to create the stories of our future.” 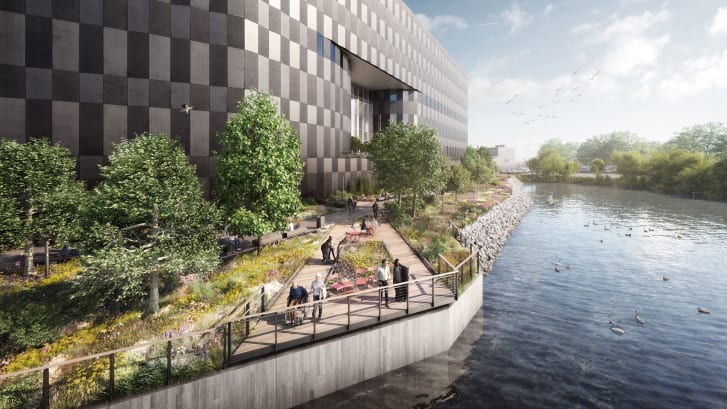 Though New York is home to a handful of production facilities, such as Kaufman Astoria Studios and Silvercup Studios, which have produced acclaimed shows like “30 Rock” and “Sex and the City,” Wildflower will be in a class of its own.

Wait a second, “spread across several floors?” You heard that right. This studio will be the world’s “first vertical commercial film, television and creative studio.” This studio is sure to be nothing less than breathtaking, inside and out, a true innovation in the film production space.

A world-class production facility such as Wildflower Studios deserves nothing less than the best-of-breed construction technology solutions in-market to ensure that work is completed in a safe, timely, and compliant manner.

The Wildflower Studios construction site will be powered by myComply’s cloud-based compliance software and outfitted with in-field hardware. Every construction worker on the project will be required to upload certification documentation to myComply’s software which will then be paired with NFC-badges. These badges will be used to grant site access through secure access points while simultaneously checking each workers certifications and logging time and attendance data.

Interested in finding out more about myComply? Book some time with a product expert today.

See our software in action.