Stop Work Orders in Construction: The Impact on ROI 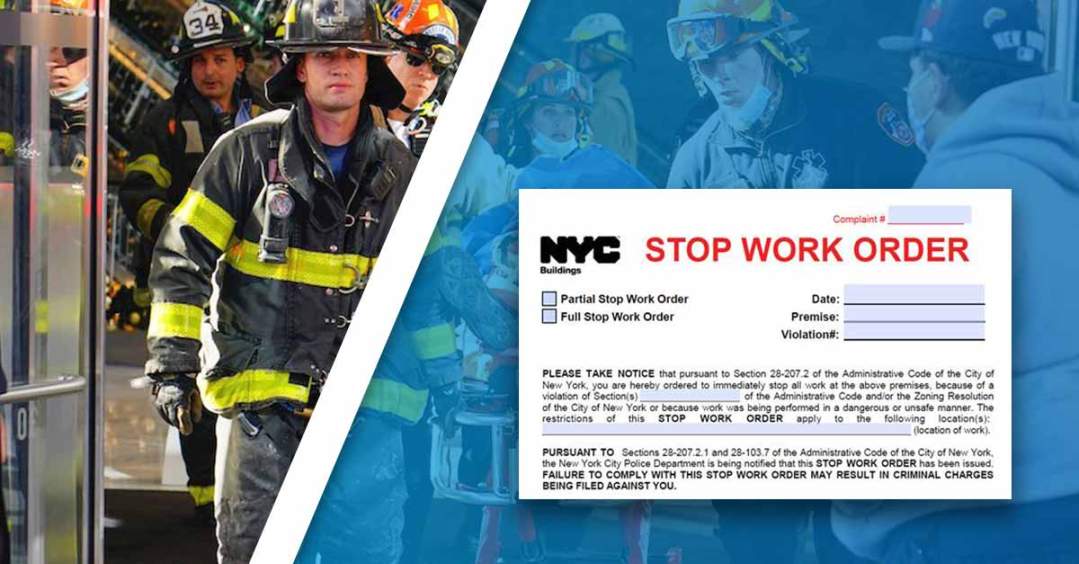 Picture this: you wake up, get ready for work, commute over an hour to the construction project that your company is general contracting on, and you see a stop work order posted on the bulletin outside the project…

If you have ever experienced this, then you know just how frustrating and costly stop work orders can be. If not, then you are one of the lucky ones. However, no general contractor or subcontractor is immune to stop work orders. Asset owners, federal agents, and state/municipal inspectors are just a few of the parties that often have the authority to conduct random site inspections; and all it takes is one safety or regulatory violation to grind your project to a screeching halt.

With razor-thin margins and impossible project timelines, general contractors can’t afford any interruptions to their work. This article explores the nuances of stop work orders, provides an example, details on how a stop order works, a return on investment (ROI) impact analysis, and steps you can take to mitigate the risk of stop work orders on your projects.

What is a Stop Work Order in Construction?

A stop work order in construction is a legally binding document that is issued by either federal or state entities to halt some of or all work on a construction project for a given timeframe or until an injunction is rectified. Stop work orders can also be issued by banks, inspectors, project owner representatives, contractors, and more.

The provisions of a stop work order are utilized to minimize the risk of a breach of contract, mitigate payment disputes, prevent bodily harm to workers on-site, deal with unanticipated project conditions, or to address hazardous materials/behaviors. 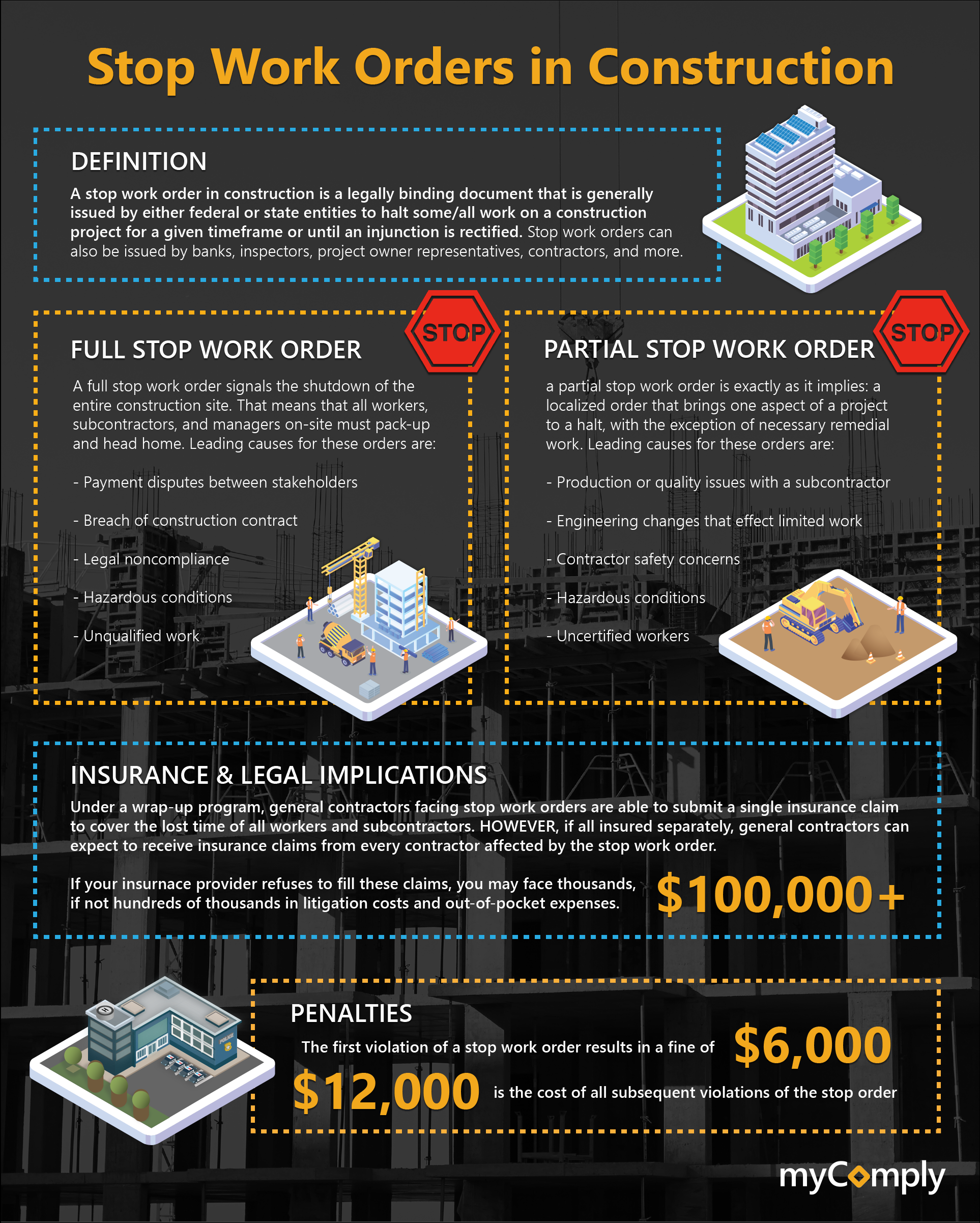 The leading causes of full stop work orders include:

Though partial stop work orders are less damaging than their “full” counterparts, they can still result in project delays if sequential work is unable to be completed on-schedule. Partial stop work orders can also be used by general contractors or asset owners as a tool to halt subcontractor work if changes to the project plan have been made.

The leading causes of partial stop work orders include: 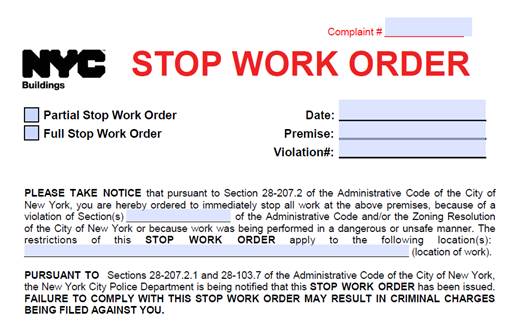 Some key attributes of this stop work order example include:

Most stop work orders will also include contact information for the parties that the contractor must reach-out to in-order to begin remedial work.

How Does a Stop Order Work?

We’ve walked you through the nuances of full stop work orders and partial stop work orders, we gave you a stop work order example from the NYC Department of Buildings, but you still might be wondering “how does a stop order work?” Fortunately, you are in the right place.

1. The Essential Components of a Stop Work Order

Though the specifics of stop work orders can vary slightly depending on the issuer and the state-specific governance, there are the same essential items across both full and partial stop work orders. It is also important to note that all stop work orders must be formally agreed upon by both the issuing party and the receiving party.

The essential components of a stop work order include:

Once issued, the stop work order demands the immediate halt of all pursuant actions, regardless of whether there are present (and/or valid) grounds for dispute. Anything other than immediate action to stop work is exposure to additional liability and risk of additional fines or penalties. For example, in NYC, the penalty for failure to comply with a stop work order is $6,000 on the first offence, and $12,000 for all subsequent offences.

If you are the recipient of a stop work order, here is what you should do:

One of the most stressful components of the stop work order management process is dealing with insurance to cover both your own losses, as well as the losses of each subcontractor on the job. This process differs depending on whether you are insured under a wrap-up program or a traditional model, where each subcontractor is self-insured.

In the event of a stop work order, wrap-up insurance is the ideal coverage, as you simply submit a single claim to cover the lost time of all your workers and subcontractors. However, if you are insured separately, you can expect to receive insurance claims from every subcontractor that is affected by the stop work order. If your insurance provider is unwilling to fill these claims, you can face thousands, if not hundreds of thousands, or even millions in litigations costs and out-of-pocket expenses.

We have covered how a full/partial stop work order is issued and handled by the receiving party. However, there are extenuating circumstances that further complicate the stop work order process. Read on to find out more information pertaining to contractual and governmental regulation.

Federal authorities such as Occupational Safety and Health Administration (OSHA) officers have jurisdiction over all construction sites and can issue stop work orders anywhere, anytime. State authorities such as NYC Department of Buildings officers have similar power over all construction sites operating within their territory. Asset owners, however, only have the power to issue a stop work order to contractors on their projects if those terms were clarified within the construction contract.

If a stop work order clause is not included in your contract and the asset owner issues one, you may have grounds for legal action if you so choose.

The FAR outlines the rules that govern the procurement of federal projects in the United States. More specifically, federal work contracts use the FAR to preside over goods and services acquisitions, including construction. Under the FAR, lies the “FAR Stop-Work Order Clause,” which states that:

The order shall be specifically identified as a stop-work order issued under this clause. Upon receipt of the order, the Contractor shall immediately comply with its terms and take all reasonable steps to minimize the incurrence of costs allocable to the work covered by the order during the period of work stoppage.”

In other words, stop work orders can be issued at by a governmental agent at any time on federal projects.

Like other authorities, most state and municipal bodies are looking for any work that violates construction codes, zoning agreements, governing law, or any blatantly unsafe activities on a jobsite.

As implied, one of the greatest threats stemming from the issuance of a stop work order is the impact on project ROI. So, what is the risk of receiving a stop work order on your project? Higher than you might think.

Some states and municipalities, such as New York City (NYC), have been taking aim at construction safety by performing “zero tolerance” safety sweeps on construction sites. Following seven fatalities in the first half of 2021, NYC Buildings Commissioner, Melanie E. La Rocca, launched a three-month campaign to promote enhanced safety across the city. The result?

Here is an image captured following a scaffolding collapse in Hudson’s Yard: 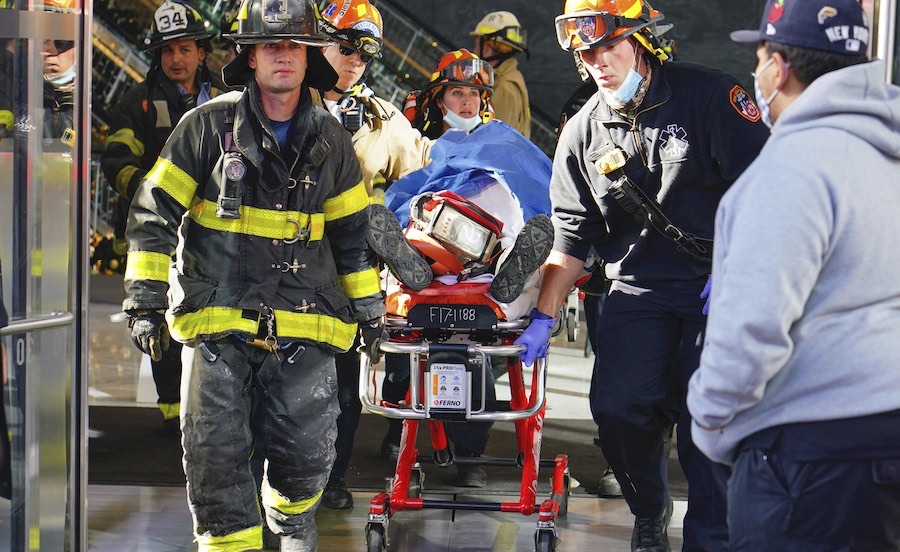 Inspectors were busy, visiting nearly every site across the five boroughs, but the reality is that inspectors cannot be everywhere, all the time.

“To protect the lives of the working men and women who are building in our city, we need our partners in the construction industry to step up and join us in pushing for enhanced round-the-clock supervision and greater accountability.”

It’s obvious that protecting the health and wellbeing of all construction workers is of paramount importance. However, unsafe behaviors, hazardous materials, unqualified workers, and other obstructions that lead to construction site violations, also have major repercussions for the general contractors and asset owners that manage these projects.

Let’s break it down:

As you can see, stop work orders can lead to massive financial shortfalls for contractors if not handled swiftly or (better yet), prevented in the first place.

The best way to prevent stop work orders from hindering progress on your sites is by implementing proactive measures aimed at minimizing the risk of noncompliance, unsafe work, unqualified work, or payment disputes.

Though some measures may be procedural, the effectiveness of proactive safety measures are greatly enhanced when paired with construction technology solutions.

myComply is one of the leading proactive safety solutions available to contractors in the construction space. Here is how the myComply platform positions general contractors to mitigate the risk of stop work orders on their projects:

Interested in finding out more? Book a demo with one of our product experts to determine whether there is a fit for myComply on your next project.